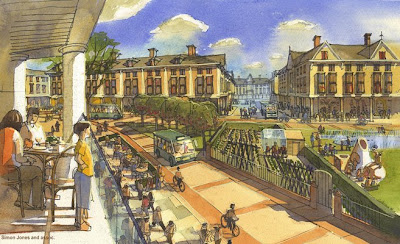 The Landscape Institute has recently published it’s response to the Government PPS on ‘Eco Towns’. As I had some comments on the subject, I’m quoted as an author of the report. I suspect the format of the response means that the LI has to come up with comments that fit particular statements. It kind of reminds me of the questionnaires that I had to fill in for the canteen when I lived in University Halls of Residence. They’d ask questions like “How would you rate the choice of vegetarian options?” or “How do you rate the variety of menu’s?”. When you really want to answer the questions, “How does the food taste?” - inevitably pretty vile, or “Is the food fit for human consumption?”- a simple no would suffice. Hence the PPS response deals with, ‘Are the locational principles for eco-towns sufficiently clear and workable?’, rather than the more straight forward, ‘Are the proposed eco-towns in good locations?’ Maybe this is the reason that I’m struggling to see much of my input! That said, I think the LI is right to push the whole ‘Green Infrastructure’ and ‘Place Making angle’, which seem to be gradually moving into the public conscienciousness. If you’re at all interested, I’ve put the press release and a link to the document below.

The Landscape Institute has submitted its response to the Government's latest proposals for ecotowns. Over the past 6 months, a consultation has been underway on the content of the draft Planning Policy Statement for the new towns which sets out the standards that the developments are expected to achieve.

The Landscape Institute is particularly disappointed at the apparent failure of Government to grasp just how significant a role green infrastructure can play in meeting a wide range of standards to be achieved, ranging from water management to food production and biodiversity.

Another concern surrounds the lack of emphasis on the importance of place-making in the creation of ecotown communities. The Landscape Institute believes this is fundamental to the success of the ecotowns as places where people will want to live and where business will want to invest.

Posted by Jonathan Clarke at 18:54