I was excited to see details of the latest work by Charles Jencks. ‘Northumberlandia’ - a giant sculpture in the form of a reclining woman, unsurprisingly located in Northumblerland and constructed from waste material arising from local mining operations.

I’ve been meaning to write about Jencks past work for some time, but had never quite got round to it. For the few that aren’t aware, Jencks is an architectural academic, writer of rather wordy, but interesting books and with his late wife Maggie, the creator of some extraordinary gardens. “The Garden of Cosmic Speculation” is his best known work, and in my opinion, it is one of the most astonishing works of art and design in the modern era. Below are images of Jencks recreation of the garden at the Scottish National Gallery.

I’m not sure they really do the garden justice (the design intent is rooted in some pretty mind-bending ideas of the universe), but hopefully they show how Jencks created a whole new design vocabulary, with chiselled and sculpted earth mounding.

Having been widely imitated, it’s interesting to see Jencks returning to earth shaping. For me this looks like a terrific project – taking something mundane and typically unattractive (how many restored mining landscapes really look good?!?) and turning it into something exciting, beautiful and unique. I’m really enthusiastic about works of art that become landmarks, so will look forward to seeing how this project works out. In the meantime I’m posting all the images of the project that I can readily put my hands on!

Posted by Jonathan Clarke at 17:40 No comments:

Just a quick post to highlight an excellent article in today's Times by Griff Rhys Jones, regarding River Access. To anyone interested in the issue, I'd recommend you read the full article (see below), but the general gist is highlighting the lack of public access to the rivers of England and Wales.

From secret bends to urban meanders, our waterways are a national treasure. They need to be opened up for everyone"

I think this next quote cuts to the heart of the issue:

"...after a year spent canoeing, swimming and surfing along our waterways for my new television series about Britain’s rivers, I have discovered that, in England and Wales at least, they no longer belong to the people. They belong to stockbrokers, to anglers and to farmers."
The quotes come ahead of the new tv series, "Rivers Journeys with Griff Rhys Jones", which starts July 26, on BBC One. I'll be setting the Sky +, as I'm off kayaking in the Alps (where there is plenty of access to water) , but it's good to see him lending his name to another worthy cause.
I'm feeling quite optimistic that publicity like this will lead to a change in the law. I've met few people who aren't angling fanatics, that don't think the current situation is wrong.
Posted by Jonathan Clarke at 22:59 No comments:

Reading the excellent, ‘Confessions of a Conservation Officer’ blog recently, I was interested to see a reference to ‘Laver’s Law’. It was originally envisaged for fashion, but I think it pretty much applies to everything designed. 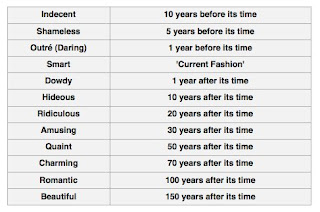 Apologies for the lack of blog updates recently, but I’ve been tres busy with work and ting.
Posted by Jonathan Clarke at 19:21 No comments: