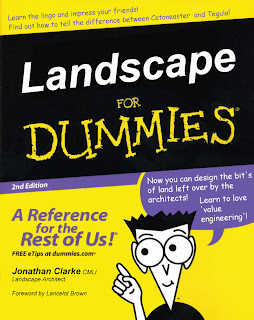 I've written pretty extensively in the past about why I don't like the term, 'landscaping', applied to the fields of design and landscape architecture.

Despite my often indignant writing, I understand that for the majority of the population, landscape architecture is not really something they're familiar with and that many lack the vocabulary to discuss it. As it happens my default response when, 'landscaping', crops up in conversation is generally to smile my most patient, parish vicar smile and explain what the correct terms would be. You see, I actually think that using the correct terminology is helpful to all involved. Here's an example:

I was recently (but to protect the guilty, not that recently) asked by an architect to review a design and access statement that he had prepared for a new building, for 'landscaping' content. Apparently it had not gone down that well with the local authority. In his summary of 'landscaping' he described the area to north of his building as 'landscaped', the area around the building as 'to be landscaped' and similarly, the area south of the building, also as 'to be landscaped'. In actual fact, the area north was existing woodland, the area around the building was to be planted as gardens and the area south of the buildings was to be hard paved. Do you see the problem? This kind of sums up why using 'landscaping' as a catch all for our work is such a problem, because it doesn't really explain what is actually being done.

So in a benevolent effort to spread the gospel of landscape architecture, I thought I'd produce a brief glossary of landscape terms:

landscape - the stuff all around us from when we step out of our, houses, offices and generic buildings, and look around. A particularly handy term to use, when you're not referring to buildings.

soft landscape - the stuff that grow; trees, shrubs, grass and all things green.

hard landscape - the stuff in the landscape that isn't green; think surfacing, furniture and other man-made features.

existing vegetation - trees and shrubs that are already there. In fact they're free - how cool is that?!?

landscaping - mowing the lawn, tarmac-ing and general maintenance done by men with pick-ups and overalls.

If that left you felling a little overwhelmed, my advice is to just try to memorise the top two or three. Or maybe just the top one - 'landscape'.

Imagine, and I'm looking at you Mr Architect, how much time you'll save over the course of your life by referring to 'landscape', as opposed to 'landscape-Ping!'. Think of every 'Ping!' as a second you won't spend with your children or designing your masterwork (perhaps future man will consider your sargasso blue, clad distribution shed in a similar light to the works of Palladio). And what is the carbon footprint of every superfluous 'Ping!' Not only will you help to preserve the sanity of pedantic landscape architects, but you'll also help to save the planet too!