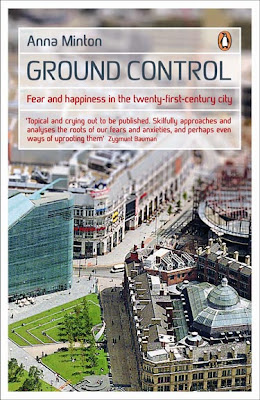 Will Wiles' review of 'Ground Control' by Anna Minton, and his recent blog post on the subject (see links below), got me thinking about public realm in a way that I hadn't necessarily considered before.

The abiding theme of both articles is how new areas of 'public realm' are springing up in Britain's cities under the auspices of regeneration, but are in fact privately owned and managed. Many of these have restrictions for individuals, such as a ban on leafletting, which would not be possible in public owned space. The articles make a good case for how this is eroding our basic civil liberties.

You see, up until this point, I'd been thinking that public space that was not managed by a local authority was an entirely good thing...

Designing public realm is the thing that get's me out of bed in the morning - parks, plazas, streets, squares and shared space is what really interests me. I'm also passionate about regeneration; and if you ask me the way to get regeneration happening from the bottom up, then I'd suggest you start with our public spaces. Buildings by their very nature are never as inclusive as our civic spaces. The public realm is for everyone, and improvements to it demonstrate investment in a community, and that you value the people within it.

However, there has traditionally been a lack of recognition for the importance of public space. Most people I speak to seem surprised to hear that any design is involved in the built environment, outside of buildings or gardens and I suspect many more regard it's design in similar terms to their daily bin collection - it just happens (I could quite happily start off on another 'landscaping' rant here). However, things are improving, and it seems to me that private developers in particular, have cottoned onto the value that a well designed public space can bring to their developments.

Sadly, it seems to me that there are a lot of people working for local authorities who aren't as enlightened, which brings me onto the absolute bane of my working life - 'adoption'. Not unreasonably, if you want a local authority to maintain a space, you have to agree certain standards. However, in practice if you are proposing anything more than grass and tarmac, you are often in for a difficult ride. I expect to get some stick from local authority officers, but I have simply lost count of schemes that I have seen diminished by adoption issues (I'm not going to go into commuted sums). There are many excellent and forward thinking people working for local authorities, but it often only takes one saying 'no' to scupper a proposal. While I think certain departments have a culture of saying no, the real problem is that many officers will constrain proposals by what is current in terms of maintenance. This makes it nigh on impossible to do anything new or make significant improvements to an environment.

As something of an aside, whilst reading the original book review, I was wrestling with something of a lighting adoption issue. While I have a good relationship with the local authority in question, they have one of those new-fangled PFI lighting contracts, where you have to ask a particular supplier to design your street lighting. The quality of the actual lights is piss poor, and it is nigh-on impossible to get them to adjust the design to co-ordinate with the rest of the scheme. Interestingly, there are also moves to have street lighting turn off at a certain time, as research has apparently shown that it can reduce anti-social behaviour (and saves stacks of cash too ,I'd imagine). I bet the muggers and rapists are rubbing their hands in anticipation...

Back on topic, once you have a scheme adopted, the other big problem of public spaces is maintenance. There is simply never enough cash devoted by local authorities for adequately maintaining public spaces. I noted this in a recent blog post about Port Marine in Bristol, but this is by no means an especially bad example. As I said in that post, on the back of showing a client around this scheme, they decided to not to put their regeneration scheme up for public adoption. In order to ensure the long term maintenance, the intention is to set up a Community Interest Company (CIC) which will look after all parks, footpaths, public squares and spaces. While I believe the developers intentions are basically good (they just want to ensure their investment is maintained), it is clearly the beginning of gated communities.

In conclusion, while I am troubled by public spaces being removed from public ownership, it seems a logical response to the current situation. Although I don't believe wseeing any significant curbs on civil liberties at the moment, it would not require a great change of direction for that to happen (for example, banning groups of young people congregating). However, my abiding feeling is that until there is wider acknowledgement of the value of our public spaces, they will continue to fall into private ownership. I think we'll miss them when they're gone.
Posted by Jonathan Clarke at 18:42