Whenever we hear about the rights and wrongs of shared space being debated in the media, one scheme seems to be mentioned more than others – the Ashford ring road. Jeremy Clarkson hates it, I suspect Guide Dogs for the Blind aren’t too keen and local residents have complained that someone will surely be killed! I thought it was worth checking out…

Geek that I am, I actually arranged to spend the night in Ashford before I headed off to France for my hols the following day. Unfortunately, traffic and the British weather conspired against me and I ended up arriving in Ashford at about half past nine, on a dark and rainy night. As a result I didn’t get any decent photo’s (and hence why I’ve included a few from around the interweb) and I probably missed a few of the schemes intricacies.

It’s an interesting design, and perhaps not quite as radical as I’d imagined it to be. The thought of making a ring road a shared space, conjured up images of pedestrians trying to get across a dual carriageway. In reality it’s not quite as dramatic as this, and it’s pretty much a standard stretch of urban road that’s been given the shared space treatment. That said, Ashford have gone for the full shared space package – no kerbs and some big spaces where cars and pedestrians can intermingle. Personally, I think you can achieve a lot whilst still having some small kerbs and I’m not convinced that big spaces with cars and pedestrians mixing, are necessarily the best idea.

However, I’d imagine that on a nice day it’s an attractive scheme with lots of new street trees, and I particularly liked the look of some of the hard detailing. However the biggest surprise for me is the abundance of some seriously wacky public art. One of the key concepts of shared space is that by making drivers feel unsure and even uncomfortable, you reduce their speed and ensure that they behave with more consideration for other road users. Hence, I can understand the rationale for incorporating some art features. However, I think that there is also a danger that you will also make pedestrians also feel uncomfortable, by including so many seemingly incomprehensible features. I’m just not sure that the combination of rather frivolous art, and a pretty serious change in road safety policy, is a great idea. It doesn’t exactly inspire confidence and I’m not particularly surprised that so many local users have been baffled by the whole thing. I would also imagine that it rather reinforces the idea that the Council have ‘gone mad’.

The worst offender by far, is the ‘Notaroundabout’ installation (not a round about, how clever). The image below was emailed to me with just two accompanying words. Utter tosh. It looks to me like someone’s buried a rusting, miniature observatory in a giant, patio recreation of a Moorish garden. 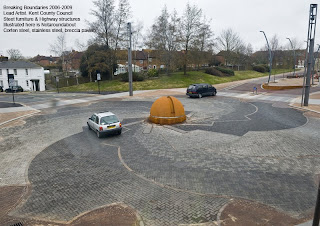 Despite all of I’ve said, I’d still be interested to visit the scheme again – ideally in daylight. It’s a bit of an ongoing experiment really; some things have worked, others haven’t. But for anyone interested in public realm and shared space, it is fascinating. I’d also really like to hear from other people who’ve visited and experienced the scheme.

Posted by Jonathan Clarke at 22:53