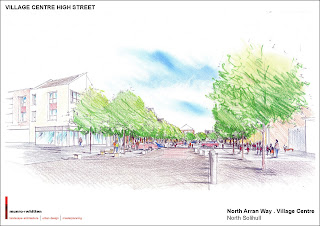 As anyone who's followed my blog, or indeed had a work related conversation with me in the last few years will realise, 'Shared Space' is a bit of a pet subject of mine.

I was thus interested to see that the most recent isssue of the Landscape Journal had gone for a bit of shared space special. While I was pleased to see the topic being discussed, my feeling is that it's probably bit late as the tide seems to already have turned against the whole shared space concept. This view was rather confirmed by the recent article in Building Design entitled, "Is opposition to shared space kerbing councils' enthusiasm?". See below:

From personal experience it feels like resistance has been steadily building to schemes which include elements of shared space. Whereas, a couple of years ago they'd have been positively received (such as North Arran Way - image above), recent proposals have been rejected early on in favour of traditional bitmac and kerbs. The reasons for this are, I believe, twofold; firstly I think that there is a natural inclination against doing anything new. This is particularly true of the risk driven world of the highway engineer, where the safety of new approaches needs to carefully considered, but also where the lazy officer can easily use safety as an excuse for carrying on with whatever makes their life easier (remember that shared spaces are always bespoke). The second reason is the work that Guide Dogs for the Blind has done to oppose shared spaces. While I'm still a little confused by why they've taken such a hard line on the matter, there's no question that they've done a very thorough job of tarnishing shared spaces in many peoples minds.

As it happens, I went through the concerns of Guide Dogs for the Blind a couple of years back in some detail, when I worked on the North Arran Way Village Centre. The aim of the scheme was to provide a pedestrian focussed centre with local shops and facilities, that also included some car access. The solution we settled upon was to go for a shared space approach with 'cranking roads' and visual narrowing (trees, bollards and paving patterns) to reduce vehicle speed, and using the placement of buildings to create well-defined public spaces. Prior to the planning application we had to go through a user group audit, which inlcuded a variety of members of the local community, including a number of groups representing disabled people. The scheme was also 'challenged' by an experienced access officer from outside the area. Hence, I read up on all the available guidance!

I was surprised by how very positive the experince was. While there was some initial opposition (particularly from a number of blind and partially sighted users, and the organisations that represented them), we were able to adapt the design then and there and include measures to address their very well considered concerns. These included the use of contrasting colours for street furniture and kerbs, introducing definable navigation routes for the visually empaired, as well as many, many other measures which made the scheme far richer than the one we started with. Everyone involved went away happy and I felt that I had designed something that would really benefit the community. With hindsight, I think it was this excercise, which made me realise how well shared space can work for everybody.

If the scheme sounds interesting, it's all on the internet. I've also dropped a link to one of the key plans below:

Ironically, kerbs were actually used throughout the scheme. The only place they were removed was at crossing points, in response to a request from users with limited mobility. I also suspect that had this scheme progressed in the current climate, I would have been met by users with placards, and we wouldn't have been able to have the positive debates that we did.

Guide Dogs for the Blind's opposition to shared space stems from the problems the removal of kerbs causes to blind and partially sighted users. Guide dogs are trained to recognise and stop at kerbs, whilst for many partially sighted users a kerb is visible marker of the road edge. Some people have also pounced on suggestion that pedestrians make eye contact with motorists (this actually dates back to Hans Monderman, but is in my opinion unnecessary - all you need is for the motorist to see you and understand that he doesn't have right of way). Guide Dogs for the Blind repeatedly make the point that blind and partially sighted people don't 'feel' included for by shared spaces schemes.

So is the removal kerbs a fundamental part of shared spaces? In my opinion yes and no. As it happens, I think the removal of all kerbs has been used too much on certain schemes. I would personally only remove kerbs altogether on very low trafficked areas, or areas where pedestrians enjoy a clear priority. However, if you are proscriptive about having to include conventional 80mm kerbs everywhere as some are suggesting (including our friends at Guide Dogs), then I think you lose what shared space is trying to achieve.

So in summary, why are shared spaces so important, and why am I so dismayed by it's detractors?

At it's heart, shared space isn't about kerbs of paving or even cars, it's about designing for people. By understanding how people behave in certain situations, we can use the built environment to positively influence their actions. Shared space is also about taking the priority for our streets back from cars - at the moment road design is all about turning circles and visibility splays, when it should be about the people that use them. What sort of people use the space and what are their needs? Where do people want to cross the road? Is the road a comfortable place for people?

It seems to me that there is a very real danger that the shared space 'furore', will serve only to maintain the status quo of cars first, people second. I sincerely hope I am proved wrong and that a satisfactory solution for is found. 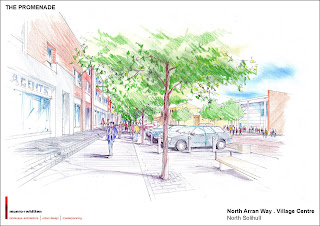 Posted by Jonathan Clarke at 00:04