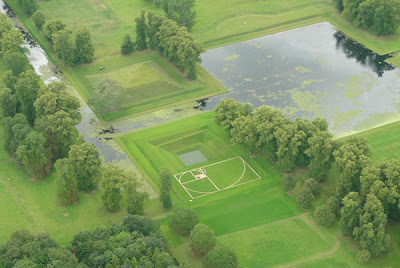 It’s pretty infrequent that a landscape scheme receives recognition beyond the professional press, but Kim Wilkie’s “Orpheus” at Boughton House, did just this. Opened in September 2009 to an assembly of the great and the good, “Orpheus” is a contemporary landscape feature, designed to complement the restoration of the surrounding historic parkland. The scheme was warmly received by many in the national press, including:

Mary Keen in the Telegraph

Anna Pavord in the Independent

I have to confess to being a bit of a sucker for big earthwork features (in fact I’d go as far as to say that no landscape architect’s coffee table is complete without a copy Charles Jencks’ “Garden of Cosmic Speculation”), so would thoroughly recommend that you check out some of the beautiful pictures taken of the scheme:

Unfortunately, my photo’s are pretty pants by comparison. Visiting times are rather limited (the house is still in the private ownership of the Buccleauch family), so it almost a year before I was able to arrange a visit on behalf of the Landscape Institute, and by this time summer had well and truly broken. So apologies for the lameness of the accompanying images.

Before looking at Orpheus itself, I think it’s worth setting the scene about Boughton House and the wider parkland. For those that are interested, I’ve put images of the wider park in a separate Castellated blog post.

The original landscape was laid out in the 17th Century, in a series of geometric canals surrounding a larger “Grand Etang”, inspired by the baroque styles of France and Versailles. In the years after this, the Montagu family (owners of the house) found themselves doing rather well and as a result, Boughton was passed on to a minor family member. Consequently, the house wasn’t given a Capability Brown, “naturalistic” makeover, that was common in the 18th Century.

Following many years of neglect, restoration of the original landscape began in the 1970’s and Orpheus is the culmination of this work.

On the face of it, Boughton House is very like your typical National Trust stately home, but the formality and geometry of the surrounding landscape gives it a very different feel. I’ve seen it described on more than one occasion as the English Versailles; while I see where this is coming from, I think you’ll be disappointed if you ever have been to Versailles, as Boughton is on a much, much smaller scale. But it’s definitely worth a visit, and I was pleasantly surprised by the quality of Boughton’s new gardens. 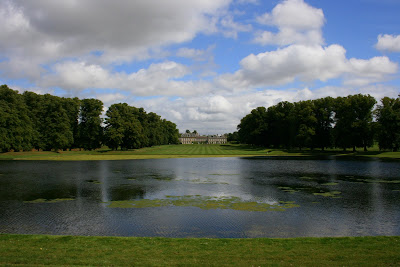 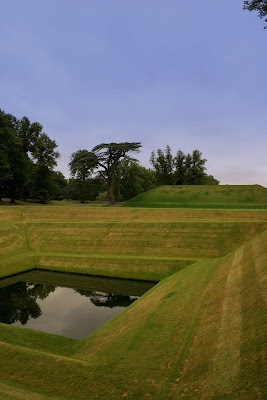 Orpheus is a very big hole in the ground. More accurately, it is a 7m inverted pyramid, with descending terraces that lead to a dark, square pool. Inspired by the Greek myth of Orpheus’ journey into the underworld to rescue Eurydice, the “hole” is a companion piece to the nearby ‘Mount’, a key feature of the original historic landscape. Whilst a very simple idea, there’s no question the “hole” makes for an interesting and unusual space, being so detached from the surrounding landscape. While the term ‘outdoor room’ is hideously overused, the space can only be described as an ‘outdoor room’. I gather that James Turrel’s Skyspaces were an inspiration, and I found Orpheus a similar experience. For the pseuds amongst you (myself included), it’s a great place to think grand thoughts and imagine all sorts of deep meanings! 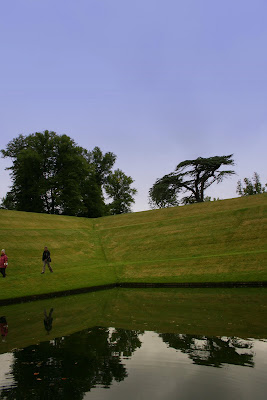 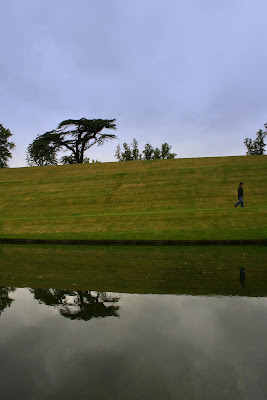 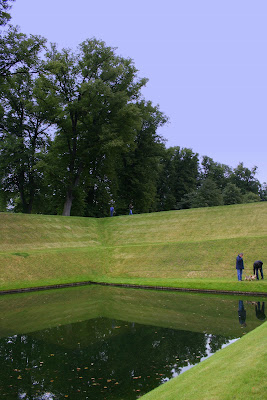 Despite the great size of said ‘hole’, it is almost imperceptible in it’s surroundings. (see below) I think it’s discovery could be an interesting surprise, if you hadn’t been pre-warned of it’s existence... 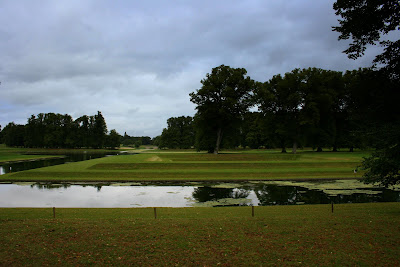 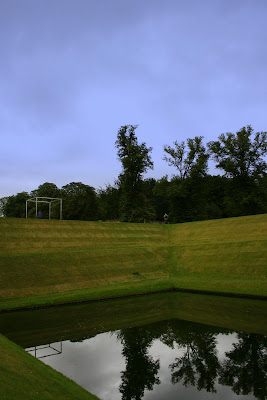 You’ll also notice that there’s a steel framed cube and some curvy stone rills, which apparently relate to the Finobacci sequence, and have like, something to do with the dimensions for the, like hole and stuff. I’ll be honest that this bit didn’t really do anything for me. Worse it reminded of a bunch of schools I’ve worked on, where similar sorts of whirly patterns were included to tick a box for outdoor maths. I suppose that they do give the feature some tangible presence in the landscape, which is perhaps the best you can say for this part of the feature. 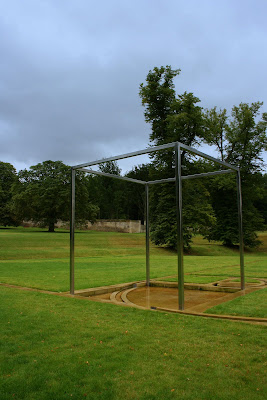 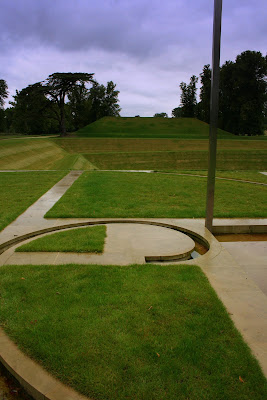 As a final point, I think it’s worth highlighting the quality of workmanship and finish, which is quite outstanding. While I do wonder how well the scheme would stand up to the hoards of visitors you regularly see at National Trust properties, I think everyone involved with the scheme should be applauded. To me, it demonstrates that it’s entirely possible to do something new and imaginative, whilst also preserving historic places and features. I look forward to the next phase of restoration at Boughton House. 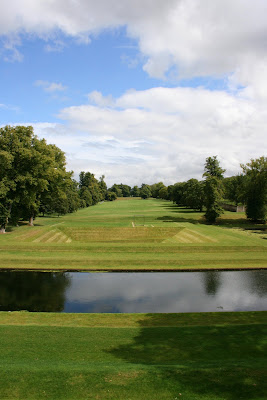 Posted by Jonathan Clarke at 11:21