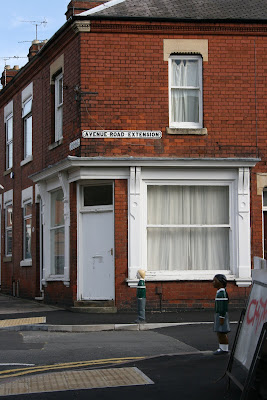 I’ve been mildly obsessed with ‘Billy Bollard’, ever since I heard that Marshall's had produced an impact-resistant, plastic post, shaped like a small child. We actually tried to order one as a sample in our office, and I was bitterly disappointed when it never turned up (did they think we were taking the piss?). Suffice to say that I've been hoping to come across one on my travels.

Hence it was pleasant surprise, when I spotted some on a detour to work last week. A whole bunch of Billy and Belinda Bollards have been installed outside Avenue Road School in Clarendon Park, Leicester. In reality, they're even more bizarre than I expected. Being so much smaller than real children is a little bit jarring - I found myself wondering if I'd accidentally eaten some sort of psychotropic plant! 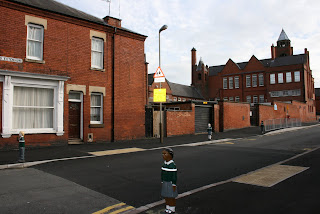 The idea (and I can nearly see what they're getting at), is that drivers see the "school children" and unconsciously slow down and drive more carefully. Supposedly thinking, "I'd better watch out for those children at the edge of the road." Unfortunately, I think it's more likely that drivers will think think they've inadvertently fallen asleep at the wheel, and are now having a macabre nightmare. 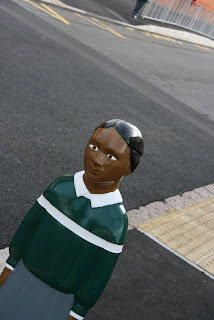 Don't look in the eyes! They'll turn you into Ferrocast, imitation cast-iron!!! 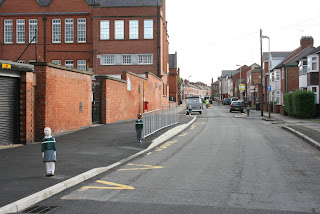 They just look sinister to me. I found myself imaging an evil partnership between the Childcatcher from Chitty Chitty Bang Bang and Dr. Gunther Von Hagens; enticing under-sized orphans off the street and into their caravan with offers of Sunny Delight and Haribo's, before whisking them off to their factory to turn them into shrunken, plasticised half-child/half-bollard hybrids.

"My friend Gunther will give you all the candy you ever need! Ha ha ha!!!" 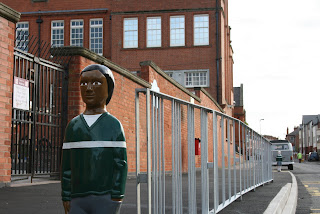 Or maybe it's like an episode of Doctor Who; the Billy Bollards are quietly positioning themselves around our cities, before they eventually rise up and conquor the world! 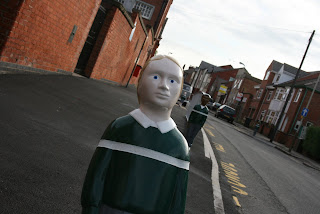 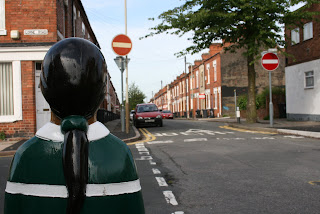 I like how they've done an asian version of Billy Bollard, seeing as how we're in Leicester (Billy being the original boy and Belinder the girl that followed). How about Billvinder?!? 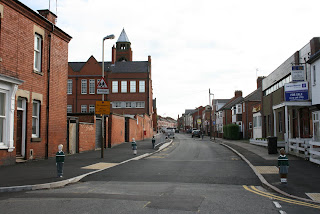 I'd be interested to hear what other people think of Billy Bollard.

Posted by Jonathan Clarke at 20:18