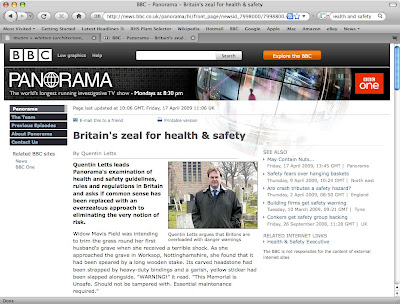 Just flicking through the channels last night, I came across the tail end of a Panorama programme about Health and Safety. While I was initially put off by the presenter coming across as a bit of a tit, think Hugh Fearnley-Whittingstall but without the charm, it did seem to be making the same point as I had in my recent post about personal responsibility.

I gather that I missed the section with an angry widow talking about gravestones being damaged by Council inspectors, and the bit about how building sites continue to be very dangerous, but are rarely inspected. As I turned on, it showed a church that had been told it needed to install hand rails going up to it’s antique altar, as part of some general work and repairs. While it highlighted the absurdity of putting modern handrails into the historic setting, it didn’t really give the reasons why. Thinking with my work head on, my guess is that this was actually a Building Regs requirement, regarding access to buildings (Part M), which in itself is a response to the Disibility Discrimination Act (DDA).

This kind of got me thinking; it seems fairly typical that there is misunderstanding of why there are these sort of requirements, which are normally just put down to ‘health and safety’ or maybe ‘political correctness gone mad’. Obviously, these are popular themes in the Daily Mail, so it comes as little surprise that the presenter of this item, Quentin Letts, is also a Daily Mail columnist. It’s also easier to criticize health and safety, than it is to talk about the issues of disable access.

In principle, DDA requirements or considering the needs of people with disabilities seems fair enough to me. However, I do wonder if it is over enforced. I’d suggest that the quantities of tactile paving across our towns and cities of illustrative of this. For those that are not aware; tactile paving marks points where blind and partially-sighted people can cross the road, however they often seem to extend way beyond the kerbs and right across the pavements. I think the thinking is – if you’re not sure what is required, more is better.

For landscape architects, a key DDA requirement is getting level access to buildings, and often requires ramps to negate steep slopes. Generally this is fair enough, but I have worked on smaller schemes where the construction of a ramp to get up to the height of a small step, has pretty much negated everything else going on, or even made other access’ very awkward. I sometimes feel that you should be able to relax DDA requirements, if it has a particularly negative impact on the rest of the scheme. The problem is that disabled groups are able to take legal actions against schemes that they perceive to not make provision for them. Local Authorities in particular are terrified of this happening, and I’m told that there are some very militant disabled groups out there.

A couple of times recently I’ve seen schemes from abroad, which have unusual steps or level features (play areas in particular), and I know that there is simply no way you’d be allowed to do this in the UK. A good example of this is the Liffey boardwalk in Dublin – in places the decking runs up and down in waves, or undulates. It makes an interesting design feature, but in the UK someone would almost certainly say that it discriminates against people with limited mobility.

I just feel that the DDA requirements are slightly skewed, and I’ll leave you with this example of an issue a colleague had. He was presenting some paving samples to a City Council team, and on describing a particular slab as having a ‘polished surface’, was told that he couldn’t specify this on DDA grounds. He explained that while it looked shiny, it was actually more slip resistant that it’s rough-textured equivalent. However, Council Officers explained that they had just put some shiny looking paving outside a new shopping centre, and had found that old people in particular, avoided it on the assumption that it was slippy. The point was, that because this material was perceived to be a problem (despite not actually being slippy), it was actually a breach of the Disability Discrimination Act.

Posted by Jonathan Clarke at 23:52